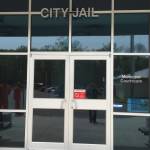 MONITORED TRANSACTION ZONE: Potential users of online services or general domestic transactions can use south jail lobby of the Scottsboro Police Department for their transactions.

Potential users of websites such as “Craig’s List” or “Ebay” and other online services or just a simple domestic exchange of a child will now be able to use the south jail lobby of the Scottsboro Police Department as a "Monitored Transaction Zone".

The lobby has public restrooms and a waiting area and is already outfitted with security features that may also deter bad things from happening.  The lobby is the entrance/exit for on-duty police officers that pass through to enter or exit the squad room within the police department 24 hours per day and 7 days per week.

Typically someone is not going to want to transact a bad business deal or cause a disturbance while handing of their child to another guardian inside a police department lobby.

While a large number of Internet transactions go without issues, the Scottsboro Police Department wants to reduce the chances of transactions going badly by making the south jail lobby a transaction meeting area or a monitored transaction zone.

In Scottsboro, police have dealt with victims of fraud resulting from online deals. In our, as well as other jurisdictions across the county, some people have become the victim of assaults or worse as a result of a transaction meeting in dark parking lots or secluded areas.

Creating a monitored zone in the police jail lobby is really just about moving these transactions way from secluded parking lots or other areas they often occur and bring them to a very public place that is monitored by police and security features.

Creating monitored transaction zones to finalize online sales has become a growing trend in policing.  No matter what you are trying to sell or buy, it's not worth getting hurt.  People planning such transactions should still be sure to let a family member or friend know where and when they are making the transaction.

The Scottsboro Police Department’s “South Jail Lobby” is located at 916 South Broad St. the entrance to the lobby faces the Scottsboro Library.