8/24/2016, Terrance J. Austin, 28 of Hollywood, was transported back from Jasper, TN, to face a Murder charge in Scottsboro. Austin has been jailed in Jasper, TN, on other charges since late July 2016. Today he was brought back to Scottsboro and formally charged with the murder of Ruby Durham, 88 of Scottsboro.  Austin was taken to the Jackson County Jail with a bond of 1 million dollars. 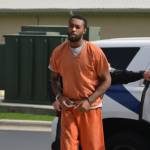