During the first week of July 2015 the Scottsboro Police Department received a couple reports of burglary and theft at local storage businesses. One of the businesses was able to provide the police with video surveillance that showed a Ford pickup truck pulling an enclosed utility trailer and two suspects cutting the lock off of one unit and stealing the property inside.

Scottsboro Police Detectives took still shots from the video of the truck and suspects and put out a BOLO to all patrol officers. The BOLO was also forwarded to all the surrounding agencies.

On Sunday July 12, 2015 an off duty Jackson County Detective observed the suspects vehicle parked by a camper at one of our local camp grounds.

On Monday July 13, 2015 Scottsboro Police Detectives along with detectives from the Marshall County Sheriff’s office went to the campground and made contact with Gary Wayne Thomas Jr. W/M/33. There was also a W/F and two small children present in the camper. Detectives discovered that the camper itself had been recently stolen out of Rome Georgia. The investigation then led detectives to a residence on County Road 94 in Fyffe Al. Members of the Rainsville Police Department assisted us in locating the residence and holding the scene. Thousands of dollars worth of stolen property including several firearms stolen from Marshall County was recovered. The owner of the residence fully cooperated with the police and stated that he was allowing the suspect to store property there. The owner believed that all the property stored there belonged to the suspect.

Detectives also learned that the suspect had a storage building in Section AL. Detectives executed a search warrant at the storage unit and again recovered more stolen property.

Gary Wayne Thomas Jr. was arrested and charged with two counts of Burglary 3rd, Theft 1st, Receiving stolen property 1st, Theft 2nd and possession of burglars tools. He is currently being held at the Jackson County Jail. No bond has been set at this time. A hold has been placed on Mr. Thomas for Crimes committed in Marshall County. More charges are pending out of Georgia. 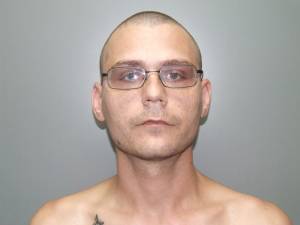 If anyone has had a storage unit broken into with in the last month and has not made a report or if anyone has purchased any property from Mr. Thomas recently please contact Detective Ryan Putman at 256-574-4468 ext. 339

Also we are trying to locate a white Haulmark utility trailer that Mr. Thomas sold to an individual in the Huntsville area for approx. $750.00. This individual is not in any trouble, but we do need to get the trailer back.