On Thursday June 15, 2017, Scottsboro Police received a report of a man in a public women’s restroom and shower area.  Police talked with witnesses and were able to obtain surveillance video of the man that was allegedly inside the public women’s bathroom.  The unknown white male was not immediately known by name to police or witnesses in the case.

The Scottsboro police detective unit released video images of the male subject through media outlets.  Shortly thereafter, citizens were calling the police department with the possible identity the subject.  Known photos of the subject were compared by witnesses and the police.

On Friday, June 16, 2017, the police located Joseph Andrew Hancock 40 years of age of Section, Alabama at a residence in the 500 block of Center St. in Scottsboro.  Joseph Hancock was arrested and charged with Attempted Sexual Abuse of a Child Under the Age of 12 and is currently being held at the Jackson County Jail.  The suspect did admit to police that he was in the public shower area at the time of the allegations. 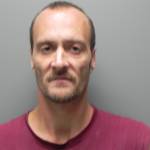